The Daily Post topic of the day for 9 May is Chaos.

When I saw this one word prompt I could immediately think of only one thing that easily fit into the definition: The 2016 Presidential Primary Season and the impending General Election Campaign. What else can you conceivably think this could be beyond uncontrolled chaos. I know, controlled chaos is an oxymoron, but this whole election cycle promises to be the biggest disaster in modern political history. 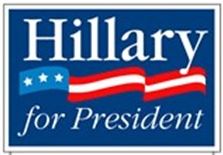 Even though Senator Bernie Sanders remains in the democratic primary fight, I think no one considers any other likelihood than a Clinton-Trump prizefight to be the forty-fifth president of the country I call home. Let me be perfectly clear, I support a democratic method of selecting our chief executive, but the 2016 version of the process is becoming more and more embarrassing.

When I was in the midst of completing my undergraduate degree I had a college level government class and learned about the way the Prime Minister is chosen in Great Britain. I found that process to be much less desirable than ours and was happy to know we had what I considered to be a better process. Over time I have come to detest the Electoral College and its process, but the primary process is usually not so dramatic or divisive.

I have a friend at work that is not originally from the United States and he mentioned the race to me the other day when we were in the exercise room. I shook my head and told him I was embarrassed for my country that we were acting in such a manner. In all truth the president does not have as much power as we want to believe. He works in concert with Congress on many initiatives, but our American economy is so large that any action they approve takes months or even years to fully see fruit.

All the political candidates, From Clinton to Trump to Sanders and Cruz, worked overtime to try to convince you that on day one of their presidency all would be different. Well, it won’t!  In the first 100 days the energy will be there and some flash, but the real work just takes time. So do not expect the chaos to end after November 8th!

Can you tell from my writing I love God? I hope so because that is what I want you to know most about me. I am also a writer who loves taking on fiction prompts and crafting a story. One day you will read my work in print. Until then enjoy it here! For free!
View all posts by Joe Owens →
This entry was posted in America, Election, Politics, Writing and tagged Clinton, Congress, Donald Trump, Election, Hillary Clinton, president, trump. Bookmark the permalink.