Amazon Drones to Deliver to Customers?

Today I enjoyed one of my favorite past times of a fall afternoon and evening watching football on television. Namely, I watched the Broncos humble their AFC Western division rival, the Kansas City Chiefs. But that is not the subject of this post. Actually it was a tease delivered during the ball game about a Sixty Minutes story with the Amazon boss, Jeff Bezos that caught my attention.

I love Amazon and have bought and sold several items on there. I know lots of people use eBay and other sites, but I just find Amazon to be the simplest for my use. Listening to Mr. Bezos I found out he is a progressive thinker in the fact that he is willing to sell his services and devices at a low profit to establish a new sector in the business. Amazon has proven this tactic to be successful time and time again.

The CBS reporter assigned to deliver this story was Charlie Rose. I don’t watch a lot of CBS news programs, but I do know Charlie Rose is a grizzled veteran of the news business, one who does not get excited too easily. So, when watching the promo for the 7 PM EST show they offered a clip of Rose as he was ushered into a room exclaiming in surprise I decided it was worth my viewing time (after the ball game of course). 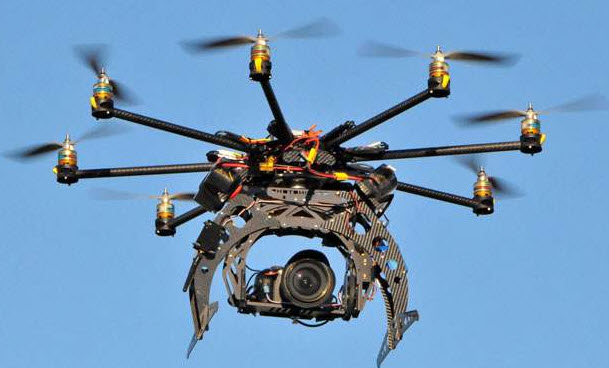 Within a few years you could receive your Amazon purchase from a drone something like this.

Mr. Bezos told Mr. Rose he had something he wanted to share for the first time and that was what was happening when they entered the room. I know how innovative Amazon continues to be and felt like this would be worth the look. Mr. Rose was as surprised as I expect anyone who watched the show was to see a type of drone perched on the conference table when he entered. The idea is that specifically sized packages could be delivered from a local distribution center directly to the home of the customer.

Bezos said they are constantly trying innovations to reduce the interval of time from the moment a customer clicks the ship button until the moment they rip into the trademark Amazon smile box to enjoy their purchase. While this innovation is in the early development phase, it opens several thoughts of discussion. What are these thoughts? How soon, how widespread and could it possibly work?

Amazon has over 90 distribution centers pumping out orders each day. For a distribution center in a metropolitan area, the possibility of this micro-delivery idea is huge. The drones are electric, so the carbon question that plagues a lot of transportation options is removed.

What are the problems?

Drones are all over the news. Of course the most notorious are the ones delivering death and destruction over battlefields all over the world. In the United States many law enforcvement offices are toying with the idea of using these devices to broaden their reach without adding the human cost. But the issue that causes the most heartburn to them is the privacy concerns. Imagine you are enjoying yourself in your home pool and a drone with a camera finds your location and spends an inordinate amount of time circling your homestead.

Then you have to imagine the potential scale of implementation. Amazon fulfills thousands of orders each day, not counting the last sixty days of each calendar year when this ramps up tremendously. Imagine how many little drones would be crisscrossing metropolitan areas. Technology is good and G.P.S. coordinates are exact, but the implementation of such a large scale distribution tool would be even more complex than the air traffic control system of the busiest airport.

Mr. Bezos said the timeframe for this is unknown, but could not happen before 2015, when the FAA legislation would allow such an idea. So one has to wonder, is this something he is really working toward or is it a ploy to drive his competition mad chasing after an expensive and possibly fatal dream? We can only watch the news and see how this idea plays into Amazon’s future plans.

Can you tell from my writing I love God? I hope so because that is what I want you to know most about me. I am also a writer who loves taking on fiction prompts and crafting a story. One day you will read my work in print. Until then enjoy it here! For free!
View all posts by Joe Owens →
This entry was posted in Amazon, Internet, Online Companies, Technology and tagged Amazon, Amazon distribution strategy, Cyber Monday, drone, drone delivery, GPS coordinates. Bookmark the permalink.

4 Responses to Amazon Drones to Deliver to Customers?