Why buy a FitBit? It can change your life!

Have you been considering the purchase of one of the Fitbit devices that charts your activity levels? If so, can I ask what has held you back? Perhaps it is the price. I mean these little gems carry a not insignificant price tag. The Fitbit HR that I use is selling right now for anywhere from $99-$136 on Amazon. 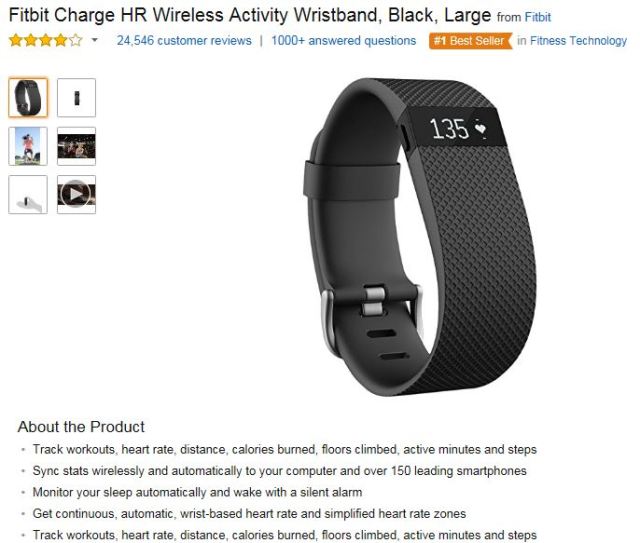 This can seem like a lot to pay for yet another device, but there are some substantial benefits to consider and that is what I will try to highlight in this post. In short, I want to share my Fitbit experience. How in ninety days this little device has radically changed my exercise and activity experience.

You already know this, but the human body was not designed to remain in a sedentary state. We who have a love affair with technology in the form of television, video games or cat videos can develop a very bad habit of settling in after work or after our supper meal to let the rest of the day melt away. Worse still is those of us who are “blessed” with a sedentary job, i.e. sitting at a desk pecking away at a computer.

Eight and a half years ago I transitioned from owning my own business, a greenhouse, which required me to be upright and moving at lest 12-14 hours a day to a job where I am sitting with the aforementioned computer before me. At the time I left the greenhouse business I was about 175 pounds, mostly lean and with a low BMI. You can see an example in the next photo, taken while giving a demonstration to my daughter’s  first grade class at my greenhouse.

Geraniums on the left and Spikes on the right

While the change was gradual, the weight began to add up and the dimensions of the clothes I had to buy kept increasing. When this photo was made, last September, I had reached the point of critical mass, at least in my mind. This was taken at Grandfather Mountain, North Carolina, on Labor Day. But feeling a need to change  and making a change are two very different ideas.

I needed something to hold me accountable. My wife and I tried an exercise and food plan called the 21 Day Beach Body last summer and I was turned off from the outset. First of all it was promoted by a girl that was a size Minus 2 that was way too perky. I mean when you are climbing onto the floor and back up and down and back up in rapid succession the last thing you want is for a never “fluffy” but always cheery someone declaring “I know it’s hard” (NO SHE DID NOT, SHE WASN’T TRYING TO USE MY OLD BODY PARTS) “But you will love me at the end of 21 days”. (I DIDN”T!)

Over the fifty or so days we kept at this I managed to shed about eight pounds and did not feel the exercise getting any easier. My motivation was not increasing and a payoff for the struggle seemed elusive. So fast forward the couple of months to the pivot point in September and I was wondering what could be the answer.

As always seems the case, the holidays came rolling through, definitely not the time to try to lose weight. I had a foreign mission trip that captivated my attention and took it off my situation for a time within the holidays, so the search for the elusive answer continued. Next was our entry into full-on winter and the worst time of year weather wise, offering yet another impediment.

But, on January 30th I made one of the best choices of my life as far as the potential impact on my health. I chose to attend a work party with my wife and was the lucky recipient of a door prize, namely my now favorite device, the Fitbit HR. I strapped it on that night about 7:30 PM or so and began what is now a transformative adventure.

Coupled with the addition of a new puppy in mid-October that needs regular trips outside to stretch her legs and attend to nature’s call, I quickly began to meet the suggested and Fitbit standard 10,000 steps per day. Then an unexpected benefit materialized. I felt more energetic and motivated to see what I could do to make the little counter reflect more steps. Through 29 days of February I averaged 8,054 steps, while nothing to sneeze at, a number that would soon pale in comparison. I can remember occasional days where I managed 10,000 steps, a total of six in this month. The sense of accomplishment was immense.

But as the snow began to clear and the calendar progressed to March, better weather and growing energy and motivation added to my excitement. The resulting boost in the number of goal days, those meeting the mark climbed to 26! On the days I fell short it was a personal disappointment. My diligence revealed the commitment to accumulating steps as my daily average increased 41% to 11,340. When I reflected on this number I thought WOW, could I be reaching my upper limit? Don’t we always quickly place limits on our potential without having all the information about what could affect our decisions. Little did I know there was something coming that would supercharge my effort all the more.

One day I was looking at the Fitbit app on my phone when I got an invitation from a high school friend inviting me to join a Challenge Group through Fitbit. I wound up adding a friend from church I knew with a Fitbit and we began to take part in this challenge, which is called the Workweek Hustle. The idea is that you try to walk as many steps between Sunday at midnight and Friday at midnight. You have until noon on Saturday to sync your device to the challenge ranks so that you are not disturbing the owls at 1 AM on Saturday.

Within a few days I was totally hooked and felt a competitive beast long dormant struggle to break free. As I told my friend that invited me I was not sure whther to hug her neck in thanks or curse her for awakening such a creature. But even more energy and motivation, not to mention pounds melting away convinced me the former was the right choice.

I was so excited when I won my first challenge that I took a screenshot of my record on my phone. It took almost  92,000 steps over 5 days to win. Well in truth I could have stopped at 88,700, but you don’t know what the others are doing, so you give it your best and see where the chips fall. 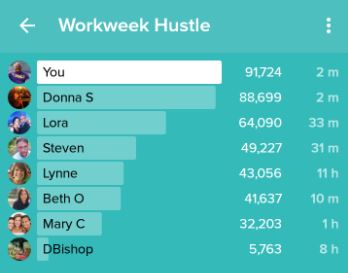 Finally I am so happy to report an amazing side benefit from all this activity. Besides the already mentioned increase in energy and motivation I can now claim at least fifteen pounds of weight gone. My middle aged spread is reducing with every step and with it the potential for heart disease, diabetes or high blood pressure. As of today I have used the Fitbit for 90 days, or roughly one quarter of a year. While projecting these values to a year’s time frame is better left to economists and other number crunchers, I could live with a year of gain & loss such as this.

This is my pace at the end of 90 days. The number not reflected here is the amount of weight I have shed, which is fifteen pounds.

If you have a Fitbit please let me know about your experience. Perhaps we can join a challenge group and get some exercise!

Can you tell from my writing I love God? I hope so because that is what I want you to know most about me. I am also a writer who loves taking on fiction prompts and crafting a story. One day you will read my work in print. Until then enjoy it here! For free!
View all posts by Joe Owens →
This entry was posted in exercise, Fitbit, Fitness, Personal Goals, Personal Health, weight-loss, Writing and tagged exercise, lifestyle, weight loss tracker, weight-loss. Bookmark the permalink.

11 Responses to Why buy a FitBit? It can change your life!