The Daily Post asks us to share the following: What’s the best idea you’ve ever had?Regale us with every detail of the idea — the idea itself, where it came to you, and the problem it solved.

The idea I want to share is more of a leading than an idea. Basically it started while I was on a seven day mission trip to Belize in December of 2012. While we were there we were blessed to spend time in the village of Maya Mopan, which is part of the capital city of Belmopan. Within this village is a facility intended to serve as a village wide tutor center, allowing children a place to come for reading, acitivities and to learn about Jesus Christ. This place is known as Heart House. It was an idea I fell in love with as soon as arrived. I could immediately understand the need as well as the potential for this ministry. In a place where the bare minimum serves as the daily fare something like this is a beacon of hope. 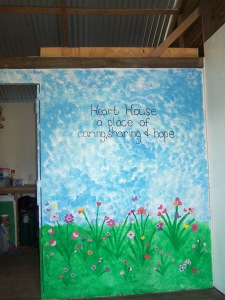 This is just inside the front door of Heart House. It is a neighborhood place kids come to read, play and learn about Jesus. We will do construction there the week of Dec 9th-13th 2013.

The children served here may not ever have the pleasure of a reading book in their home or outside of their school setting. We are spoiled in the United States and much of the other sections of the developed world. Books are not a luxury we struggle to enjoy. In fact many of us have an abundance of reading material. We also have businesses devoted to handling the burgeoning stacks of used books.

The beginning of the books we gathered for heart House’s library.

While talking to one of the missionaries serving at the Heart House I found out there was plans to expand their meager library into a much larger space. Since I had the opportunity to see and recognize the lack of availability of book stores and understanding the financial value of a fully stocked library I asked where the books might come from to stock the new library. Carol, who serves with two others here said she trusted God would provide.

Another thing I will share with you is that as I prepared for my first international mission trip I asked God for something i counted as very important. I asked that he prepare my heart and mins for not only what I would see, but what he wanted me to see as I ventured far away from my home and usual comfort zone. You will remember as I start this I referred to this as more of a leading than an idea. After all building a library was not my idea. But helping to fill it was.

I asked Carol if it would be helpful to gather books in the United States to send along for the library. I think I will always remember her response: “You would do that?” Here was someone giving their time and living in this country, trying to pass along their Christian values and knowledge and she asked me if I was willing to do something to help her. The answer, of course, was yes. I had in mind a plan to return to my church and ask for everyone to rummage through their bookshelves or storage areas to find gently used children’s books.

Not only here, but at other places we found books that would fit the bill. There is an old tobacco ware house in my hometown that has been converted to a Flea Market. One of the vendors within buys used books. I visited him shortly after I returned and discovered a treasure trove of children’s books. I also looked at the neighborhood yard sales that poped up as the weather warmed. There was also an event Called Plumb Alley Day on the Saturday of the Memorial Day Weekend where people had plenty of children’s books for sale. 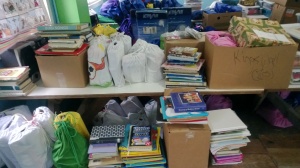 Books and backpacks staged at the Baptist Training Center in Camolotee Village on the 2013 mission trip.

Between all these efforts we were able to come up with about 600 books to send to the Heart House. In the meantime Carol and the others were busy getting the space ready. Construction in Belize is not nearly as expensive as in the United States, but is wholly dependent on funding by those who support the ministry. Thankfully the support stayed dependable and the space was developed.

So fast forward to the 9th of December, 2013 and we finally arrive at Heart House to see their progress. The library space is beautiful, although it is a simple square room with cinder block walls. While there we replaced an again and leaky roof on the Heart House and built new shelves to transform this empty square into the shell of a library.

This is the old library with the small collection of books we saw in 2012.

By listening to the leading of God I was able to receive as well as give a great blessing to others. Now the children of the surrounding village will enjoy the pleasure of reading and awesome adventures through the blessing of the library. I am so glad to share this with you and look forward to reading your response as well.

Ivan is the first Heart House kid to enjoy the new library.

Take a look at some of the other Daily Prompt – Brainwave :

Can you tell from my writing I love God? I hope so because that is what I want you to know most about me. I am also a writer who loves taking on fiction prompts and crafting a story. One day you will read my work in print. Until then enjoy it here! For free!
View all posts by Joe Owens →
This entry was posted in Writing. Bookmark the permalink.