I can remember the feeling of anticipation I had as a child, waiting for Christmas Day to come. I had parents who like many perpetuated the Santa Claus myth, giving me the excitement of believing this magical fellow from the North Pole had the ability to know when I was sleeping, when I was good and bad, basically control over the reward I got at Christmastime. I never experienced disappointment on Christmas morning and equated that with making the grade in Santa’s eyes.

I know some kids feel a sense of betrayal and disappointment when the reality becomes clear about Santa. I was fortunate because at this same period in my life my knowledge of the real truth became clear. Thanks to a godly woman named Minnie Bryan that carried me to church since the time I was old enough to go, I received godly teaching about the Greatest Christmas Gift, Jesus Christ.

1And it came to pass in those days, that there went out a decree from Caesar Augustus, that all the world should be taxed. 2(And this taxing was first made when Cyrenius was governor of Syria.) 3And all went to be taxed, every one into his own city. 4And Joseph also went up from Galilee, out of the city of Nazareth, into Judaea, unto the city of David, which is called Bethlehem; (because he was of the house and lineage of David:) 5To be taxed with Mary his espoused wife, being great with child. 6And so it was, that, while they were there, the days were accomplished that she should be delivered. 7And she brought forth her firstborn son, and wrapped him in swaddling clothes, and laid him in a manger; because there was no room for them in the inn.
8And there were in the same country shepherds abiding in the field, keeping watch over their flock by night. 9And, lo, the angel of the Lord came upon them, and the glory of the Lord shone round about them: and they were sore afraid. 10And the angel said unto them, Fear not: for, behold, I bring you good tidings of great joy, which shall be to all people. 11For unto you is born this day in the city of David a Saviour, which is Christ the Lord. 12And this shall be a sign unto you; Ye shall find the babe wrapped in swaddling clothes, lying in a manger. 13And suddenly there was with the angel a multitude of the heavenly host praising God, and saying,

14Glory to God in the highest, and on earth peace, good will toward men.

15And it came to pass, as the angels were gone away from them into heaven, the shepherds said one to another, Let us now go even unto Bethlehem, and see this thing which is come to pass, which the Lord hath made known unto us. 16And they came with haste, and found Mary, and Joseph, and the babe lying in a manger. 17And when they had seen it, they made known abroad the saying which was told them concerning this child. 18And all they that heard it wondered at those things which were told them by the shepherds. 19But Mary kept all these things, and pondered them in her heart. 20And the shepherds returned, glorifying and praising God for all the things that they had heard and seen, as it was told unto them.

21And when eight days were accomplished for the circumcising of the child, his name was called JESUS, which was so named of the angel before he was conceived in the womb. Luke 2:1-21 (KJV)

This is the single greatest gift ever to mankind from an all-knowing, all-loving Creator. I was a teen when i finally took the step of accepting Jesus as the Savior of my life. In the 30 years since i never have doubted this was the best decision in my life. I had no regrets about living a different lifestyle in high school or college, due to the example illustrated not only by my church friends, but because of the way my parents lived. You see my parents did not attend church with me. They were moral people, always embodying a Christian lifestyle, but due to some incidents from well-meaning but misguided church goers they were turned away from a fellowship that could have allowed them to grow as I have. 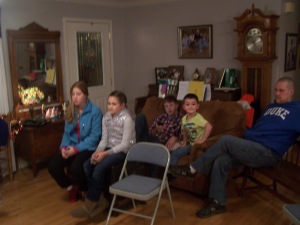 Christmas with my dad’s family at my home. 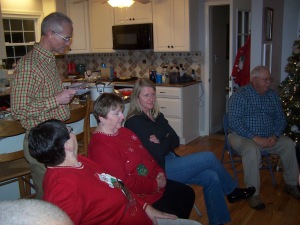 The next great Christmas gift I want to tell you about is my family. It is smaller now than it as ever been, as is probably the case with all families, due to the advance of time and the fact that grandparents sometime just don’t live forever. My experience is different, however. My dad, mother and brother have all left this world, which makes my Christmas experience much different from when I was younger. God has blessed me with a loving core family, which includes my wife, a son and daughter, which I treasure greatly. But also, I have two uncles and two aunts from my dad’s side and an aunt and uncle from my mom’s family that remain. I love spending time with these people as they have been a constant part of Christmas my whole life.

The last great Christmas gift I will share about is the recently completed mission trip to Belize. I know that sounds strange, but if you have ever heard of something called the Love Languages (I learned it from my wife through a bible study) mine is Acts of Service. In other words, nothing makes me happier than to serve others. Traveling 3,000 plus miles to a new country I knew nearly nothing about might have intimidated some, but as soon as I got on the ground, my Love language took over and I was eager to identify ways I could help.

One of the children we were blessed to share shoe box gifts with.

If I did not open a single gift this Christmas I could not be any happier. I feel like my gifts have been opened and my heart has been filled with such love that I may be good for a few Christmases. The love of God is a powerful thing, especially when stoked by your family and seeing it put into action by a God-filled mission team and family at home. As I think about Christmas blessings I can say I am blessed to overflowing.

Can you tell from my writing I love God? I hope so because that is what I want you to know most about me. I am also a writer who loves taking on fiction prompts and crafting a story. One day you will read my work in print. Until then enjoy it here! For free!
View all posts by Joe Owens →
This entry was posted in Christmas, Family, Mission Trip and tagged Christmas, faith, Family, greatest Christmas gift, Inspirational, love, Religion, Spirituality. Bookmark the permalink.